I am a 30 years old mummy with Rheumatoid Arthritis (RA). Despite the fact that I am at the mercy of this RA monster, I am still in command of the love of my beloved husband, Ted and two active and lovely children, Isabelle (aged 4) and Zachary (aged 1). 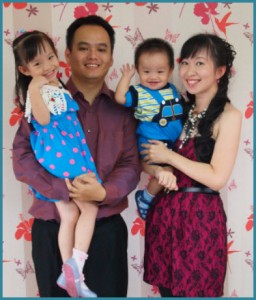 What are the causes of my RA?

There are many faces of RA, or rheumatic diseases. Many claim that the reason for contracting RA is unknown. Others purport that a majority of RA sufferers see a common pattern, that is, it is hereditary or rather, it is in the genes passed down from the older generation. For me, I can almost certainly say that there isn’t any genetic-related reason behind my RA because none of my family members or relatives have RA at all. Reason ‘unknown’ is also not much a convincing answer either – There is bound to be a reason or some reasons that RA happens; therefore a reason like ‘unknown’ is so easy to pass by for people who simply cannot explain at all.

I do know the reason for my RA nonetheless. It came about following a sad incident that happened to me in October 2010. I was into my 2nd pregnancy and I had a miscarriage. That was the saddest moment of my life. Saddest ever… It is difficult for one to understand how much pain and misery I was going through during that rough time. I was carrying the fetus inside my womb while knowing that it wouldn’t have the chance of coming out into this world for more than a week. I have hoped and prayed very hard for a miracle but it didn’t appear. In the end, I had a D&C performed. Right after the operation, I thought I would feel better after my emotions settled. But physical pain started to be felt on my right wrist. I was given two doses of prednisone to ease the pain but with the symptoms persisting, a blood test was ordered and it turned out that I have active RA with Rheumatoid Factor (RF) of 250.

I was convinced ever since that the miscarriage was the sole event that have caused the onset of my RA. But this is only half true. Under the care of a very experienced naturopathic practitioner of Nambudripad’s Allergy Elimination Techniques (NAET), I soon also learn that my cervical cancer vaccination – 3 shots taken – was the root cause behind my RA. The miscarriage was only a trigger, one that upsets the whole immune system, which had already been compromised, (just like the tip of an iceberg) to get all haywired and start attacking my joints. Because it attacks my joints, they call it Arthritis.

My conclusions of the main causes of my RA are therefore: pathogenic infection relating to vaccination and emotional trauma.

How bad was my RA then and now?

My RA then
At the onset, my RA was merely some dull pain around my right wrist. I conveniently shrugged it off as a little inconvenience from over-usage of computer. Even with the diagnosis that it is more than just a little pain, but rather one of a chronic nature, it took a while for the pain to turn shaper and eventually after months of constant sharp pain, I lost range of motion on my right wrist. Then, the disease starts to ravage all my other good joints. It turns destructive; the pain started to migrate to my left wrist, now, it became systematic and parallel pains and inflammations on the wrists joints. Soon, I lost my full range of motion on my left wrist as well. I was devastated. I was so scared that I could be paralysed at such a young age. My RF was 250 then and very active! Some two to three months into the diagnosis, the fear had me searching for ways to control the disease. I started incorporating dietary changes which did really help with my RA management. Lucky for me, I fell pregnant again four months down the road and my RA went into remission during my pregnancy. Unfortunately, the lost range-of-motion was never returned to me.

My RA now
My RA flared up bad time less than a month after delivery. I held back any medication consumption for a month for breastfeeding, not wanting to risk any leak over of those medications into the breast milk for my newborn. A month later, I started on mild dose of Prednisone. The excruciating pain persisted for another half a year, around both my wrists at the same time, affected both my feet. My left foot was badly swelled. A big edema was obvious. Walking became so difficult let alone climbing stairs and doing anything physical which require you to move around a bit more than the confine of a bedroom. I rather stayed in most of the time. Soon, both of my knees experienced prolonged stiffness in the morning; now even a simple squatting becomes a chore! The flare up was so bad that I could not continue with my current job; I was so badly affected that I must focus on getting well because the progression of the disease after my pregnancy was too quick and scary. I then went on a number of regimes and finally, I started to feel stronger and better again. The edema on my feet were gone, flare-ups attacked less often, the stiffness on my knees was also non-existent most days; the only obvious RA signs are the protruding wrists bones and slight nodules on my left foot which suffered badly then. In other word, I’m feeling about 70% well most of the time, considering that I am now losing control of my diet. I believe I can do better if I stick to a healthier diet regime.

How do I cope with my RA and life with RA?

A life with physical pain, lack of energy, chronic fatigue and stress is a given. It is about continuous learning. As the saying goes, knowledge is power. At the claws of the RA monster, we are at its mercy but with knowledge, we can change the way we respond to its ravage, the way we choose to fight back, and the way we convince ourselves and our loved ones that we will stay strong and persevere in this journey.

This life of mine since RA is no longer the same. I was not able to breastfeed my boy for six months as desired, let alone carry my toddler who now weighs at about 10kg. Thinking that I have to give up the fun of spinning and step aerobics is not enough of a misery, the feel of disappointment and failure consumes me when I do not now have the energy to even start the engine of my car. A loss in freedom… It took a lot out of me to make it to work every day and at the end of a normal day like that, I came home feeling drained out. I laid asleep for a while before I could stand up and get on with the rest of the day. Eventually, I said goodbye to my favourite career as a foreign exchange dealer. The most difficult of all is the internal struggles within me that I have to come to terms with from time to time.

Like many RA sufferers, I too need a shoulder to cry on; and I find this support within my own family. Their motivation and encouragement have been the pillars of strength to keep this battle will going. I embrace the pains as if I am breathing in fresh airs, I love my body as a whole including the signs left behind by RA and this is what I call the synergies from thinking positive and optimism; the good vibes are virtually vibrating throughout my every cell.

This has been how I am living my RA life. Look at the bright side: I’m now a work-from-home mum, who had gotten out of the rat race and gained time freedom. There are more time to spend with my children and watch them grow. I grow to understand more on general health and apply this newfound knowledge for my loved ones. Within a month of leaving my full time job, I was back to my pre-pregnancy weight for the first time in four years and this raises my self-esteem, confidence and importantly, I feel very beautiful and good. Sometimes, it is true when people say, if you take a step back, you ‘watch the magic happen’.

5 Comments on A Little bit about Myself & RA